Alexander Symonds Surveying Consultants was not born yesterday. Not even close. Founded in 1932 in Adelaide, Australia, Alexander Symonds has spent decades growing, expanding, and perfecting. Maturing, if you like, like a fine wine from the nearby Barossa Valley. An excellent, cultivated drop that’s now robust enough to employ around 120 staff, no less. Cheers to that!

With a headcount over 100 and a project portfolio in the thousands, we were very excited that project manager Abbey Scott found time to talk to us about how Alexander Symonds manages their expansive business and project load.

Alexander Symonds is all about quality surveying, says Abbey, who’s been with the company for 15 years. “We do major infrastructure, we do mines, dams, movie sets, we do fencing, and land divisions. Anything you can measure; we can survey it.” Cheers again!

Abbey is one of the project managers for the company’s minor land divisions, and she recently managed their implementation of Synergy. Another reason to raise our glass. “We had six people on the implementation team. Because each section in our company is a bit different, we wanted to make sure we met the needs of each discipline with the software. So, on the team we had some senior surveyors, we had drafters, we had an admin person, and me as a project manager.

“We had to do a lot of change management in the process, because we hadn’t really done this properly before. 14 years ago, we created an in-house system. The system was called a BizPort, and it was more about inputting projects and then entering timesheets and costs and consumables. There was no real project management in that system, and hardly any reporting — we just outgrew it … by a lot.”

Alexander Symonds’ growth has been fairly steady since Abbey started. “When I started in 2005” Abbey said, “there were about 50 employees — now we have a lot more surveyors and a lot more field assistants. We have a bigger planning team dealing with our land divisions and offer a more vertically integrated service. The growth has been to support our expanded service offerings, which include not just our traditional surveying, but expansion into GIS, Aerial Drone Mapping, Underground Service Location and 3D Laser Scanning. We’ve also grown our footprint into regional areas covering South Australia and Western Victoria,

The problems before Synergy — access, time, and lack of integration

Before implementing Synergy, Alexander Symonds’ field staff would have to go into the office to complete their requisite admin tasks. “In our old system,” said Abbey, “staff were limited to putting in timesheets via PC, so what used to happen was they would come back into the office and sit down for half an hour and put a week’s worth of timesheets in at once — for project management and invoicing, that really wasn’t the best solution.”

Another challenge for Alexander Symonds was the incredible variation in the time their projects can take. “Because we have such a broad range of timeframes for work, it was really hard for us to find the right systems. Doing big developments can last 20 years, while doing a field survey for a boundary fence can last three hours. So, for us to get a system that has the flexibility and capacity to manage both those things was pretty challenging.”

Exacerbating these issues was the fact that none of the software systems they were using at the time integrated with each other. That meant more time wasted on manual entry, more room for error, more duplication of tasks across different systems.

“We had so many systems that just didn’t talk to each other. We had a lot of manual processes and double handling — it was a nightmare. And then, because we are out in the field, we have a lot of safety requirements, so field staff have to do pre-start safety checklists, and that piece of software doesn’t talk to anything else.”

“The fact that everyone can access Synergy on both desktop and on their mobile phone and get documents and all that kind of stuff, is a huge benefit,” said Abbey. “And I think perhaps the biggest benefit for us is all the connectors — having the SharePoint connector and the MYOB accounting connector is fantastic.”

It’s not just the integrations that are already there, but also the ones to come that make Abbey excited about the fit of Synergy software for Alexander Symonds. And frankly, makes us excited too […blush].

“If we do find a piece of software that we might need — for, let’s say, safety checklists — that we can actually engage Synergy to create a connector. Just knowing we can do that is really beneficial for us too.”

Meeting your needs and your people

Before settling on Synergy software for Alexander Symonds’ business and project management, Abbey did her research. In the end there were two other, generic software solutions under consideration. “I did look at both of them pretty in-depth,” said Abbey. “They were both off-the-shelf products. I realized neither of them are being worked on, they’re not being updated, they’re not being developed — I figured, if we were going to go with something like that, we’d be in the same situation in a couple of years. We’d just outgrow them.

“We went to a couple of the Synergy conferences, we met with [CEO and founder] Scott Osborne and [product manager] Paul Hemmings, and they came over to Adelaide with the roadshow. When we walked into that room at the roadshow, there were about 40 companies represented and many were existing clients of ours — all the architects, all the engineers, they were all using Synergy. It was a room full of our people!”

“When we were researching all the new project management systems, Synergy was by far the most suitable for us, we knew that,” said Abbey. “But once we signed up and had a couple of chats with Paul Hemmings, we realized we needed something else — something for our field teams, and Paul said, ‘We can create an app that syncs to Synergy’. So, we went on that journey with the development team.“

A consultation process between Total Synergy, Alexander Symonds, and several other surveying and built environment firms followed. Development of the Synergy Fieldbook app began, and it continued, as a consistently interactive process, until its beta release in May 2020.

“We’ve never done anything like that before,” said Abbey. “We didn’t really know what to expect. But the product team at Total Synergy were really clear, really easy to communicate with and didn’t miss a timeframe. There were no delays. It was implemented and it was all pretty amazing actually.

“The Fieldbook interface is really simple, which is exactly what we wanted. I think people love making things complicated and adding all these features and sometimes that’s great, but we wanted something simple, so everyone could use it really easily and really quickly.”

Asked about the benefits that Alexander Symonds were seeing with the Fieldbook app, Abbey was very clear.

“The fact that it actually syncs with Synergy and that you can access all your projects, without having to manually enter project numbers and search for things. The ability to put in time for the field party leader and the field assistant via the app. Recording consumables while on site — things like car mileage, expenses, pegs and pick kits. And they’re all really easy to do in Fieldbook … They even put the link for Google Maps in, which is great for getting to site.”

And what do the field staff think of Synergy Fieldbook? “They love it — they’re all over it,” said Abbey.

They’re all over Fieldbook, all over the country, and Synergy’s all over their business and project management. Vintage cellar stuff. 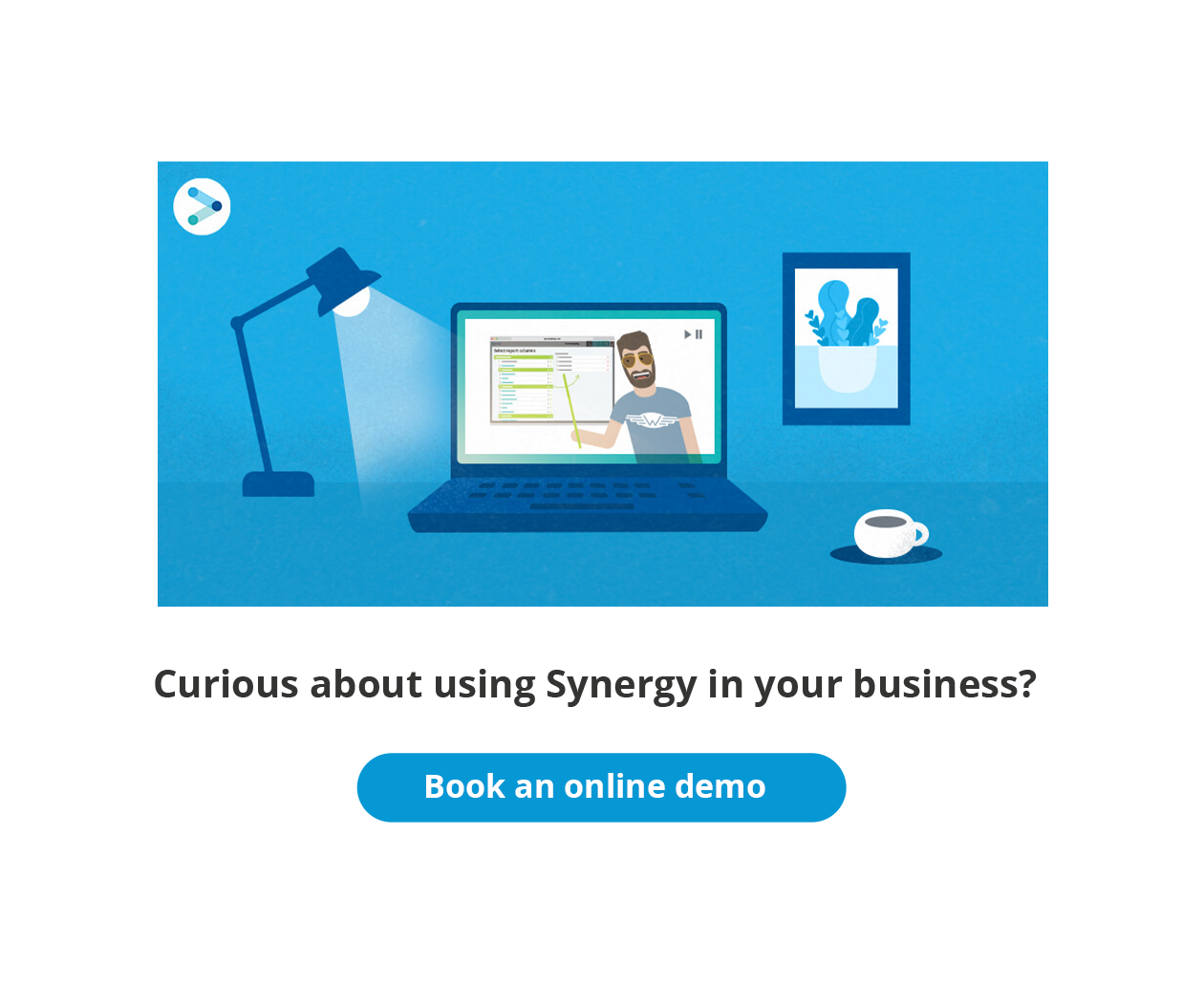